Popular highschool freshman Hanabi Yasuraoka has been in love with her older childhood friend, now her homeroom teacher Narumi Kanai. But upon seeing Narumi’s eyes after seeing the new music teacher Akane Minagawa, Hanabi instantly knows that he is in love with Akane. That’s when she meets Mugi Awaya, another popular student who is in love with Akane, who was his tutor at middle school. The two made a pact and form a fake relationship to satisfy each other’s ’emptiness’ and to not genuinely fall in love with each other. 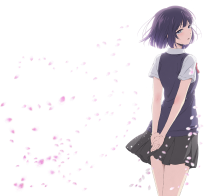 A freshman when she met Mugi, now a 17-year-old high school girl. Hanabi has been in love with her childhood friend Narumi, who she affectionately calls “Onii-chan”. After finding out that Narumi is in love with Akane, Hanabi formed a fake relationship with Mugi to satisfy each other’s ’emptiness’. She also enters several physical relationships with her best friend Sanae after knowing that she genuinely loves Hanabi. She and Mugi later officially become a couple, retaining the pact they made, and promised to be genuine with each other after being rejected by their respective objects of unrequited love.

A popular and good-looking high school student who is in love with his music teacher Akane. He formed a fake relationship with Hanabi to satisfy each other’s ’emptiness’. It was later revealed that back in middle school, Mugi has already been in a secret relationship with his senior, Mei Hayakawa, who took his virginity since he couldn’t confess his love to Akane. Mugi has always been aware of what kind of person Akane is, but loved her nevertheless. He stated that with Hanabi, he doesn’t want to ‘ruin’ her nor leave her alone, implying that he has began to hold genuine feelings for Hanabi, thus breaking their former pact of not falling in love with each other. Later on, Mugi confesses to Akane and they both went on a date, however after their date Mugi finally realizes that he can’t hold on to his ‘ideal’ person of love and thus bids farewell to Akane with the hopes that he would finally leave his feelings for Akane and focus on Hanabi instead.