Ippo Makunouchi was an extremely shy high school student who never had the time to make friends because he was always busy helping his mother run their family fishing charter business. Because he kept to himself, a group of bullies led by Umezawa got into the habit of picking on him. One day, these bullies gave him a rather serious beating. A middle-weight professional boxer who was passing by stopped the bullies and took the injured Ippo to the Kamogawa Gym, owned by retired boxer Genji Kamogawa, to treat his wounds. After Ippo awoke to the sounds of boxers training, the boxer who saved him, Mamoru Takamura, tried to cheer Ippo up by letting him vent his frustrations on a sandbag. It was then that they had their first glimpse into Ippo’s talent for boxing. After that incident, Ippo gave the situation a lot of thought and decided that he would like to begin a career as a professional boxer. When he conveys this message to Mamoru Takamura, he gets verbally reprimanded: Takamura thought Ippo was taking professional boxing too lightly. However, Takamura felt that he couldn’t outright refuse Ippo, especially since his feat of punching the sandbag much harder than anybody else in the gym (except for Takamura). Therefore, he challenges Ippo to catch 10 falling leaves from a tree simultaneously after a week of training, fully convinced that Ippo would fail, Takamura jogs away as he continues his roadwork.

However, after a week of tough training, involving nightly hours, Ippo manages the technique in the nick of time. He waits for the jogging Takamura to come by his usual path and surprises him by catching all 10 of the falling leaves and only doing so with his left hand. This impresses Takamura greatly, and he informs Ippo that the action required to catch all 10 leaves is called a boxing jab. Takamura invites Ippo back to the boxing gym for introductions. 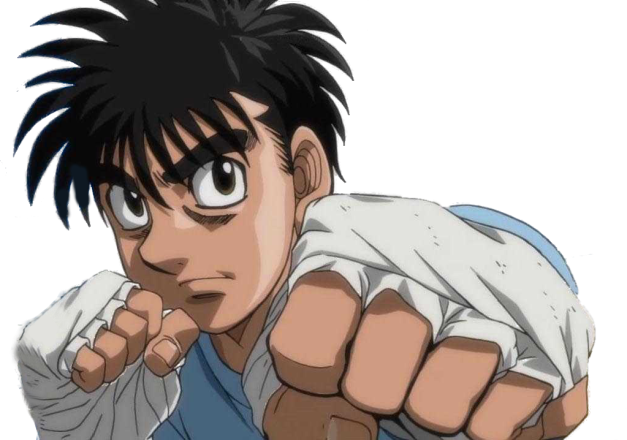 When they got back to the gym, the coach, Genji Kamogawa, was not at all impressed by Makunouchi’s lack of fighting spirit, and therefore, was challenged by Takamura to have a practice spar against a member of the gym. However, Kamogawa decides to give Ippo a severe challenge and tells him to spar with Miyata, who is 16, the same age as Ippo. Miyata is known as a boxing prodigy and is one of Kamogawa gym’s future hopes. Takamura gets extremely worried with this prospect, as Miyata skill is way above the four-rounder pro boxer. As expected, Ippo loses by KO, but not until Miyata struggles dodging his punches and finally ends the match with his trump card: “The Counter”. Coach Kamogawa decides that he has great fighting sense and spirit and decides to train him to eventually become the Japanese champion with a world ranking while Miyata became the OPBF (Oriental Pacific Boxing Federation) Champion. Both are expected to hit high in the rankings and, eventually, fight each other for the world champion’s belt.

The story focuses heavily on character development—even during the matches something is learned about both fighters. Ippo has a habit of running into his opponents before matches, giving him a chance to learn more about their backgrounds and even sympathize with them. Ippo is an extremely timid and modest person who never assumes that he is strong enough. He instead draws courage from seeing the strength of his opponent and realizing that he is able to stand up to it. Ippo and his friendly rivalry with Miyata is the main draw in the early part of the series. That later changes to Ippo’s path toward the Japanese Featherweight Championship and eventually the world championship. Along the way the audience is given glimpses into the other characters’ pasts, motivations, relationships to others, and current boxing trials. A colorful cast of supporting characters and opponents as well as side stories concerning their paths in the boxing world rounds out the series.